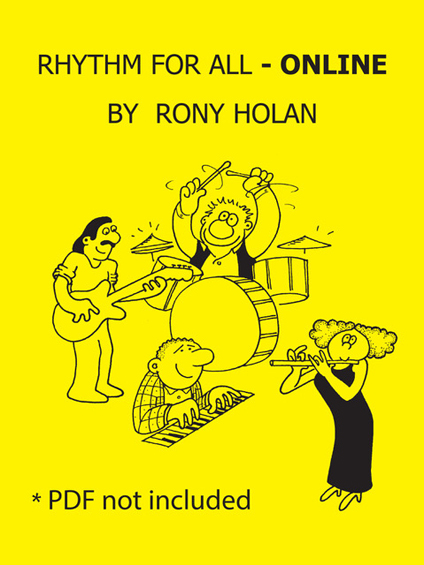 Rhythm is a fundamental component of music and a key element in accurate and effective musical performance. The ability to understand and interpret rhythmic notation is a valuable tool and enables a musician to read, write and perform in diverse musical situations. As the title implies, this book is geared for all musicians who wish to develop, improve or practice their rhythmic reading.

Buy Rhythm for all

Born in Jerusalem, Rony Holan is an accomplished musician and one of Israel’s premier jazz drummers. While completing his musical studies in France, he played with a number of top French musicians and was the drummer for the Monte Carlo Big Band.
Rony played in numerous musical productions at the Habima and Cameri theaters in Tel Aviv and has participated in many international jazz festivals. In addition to his collaboration with Israel’s best musicians, he has accompaniel jazz legends includingDavid Liebman, Benny Golson, James Moody, Eddy Daniels andLou Soloff. Currently, he performs with the Yaron Gottfried Trio and with his own group playing his original compositions. He also wrote the music for Khalil Gibran’s masterpiece “The Prophet” and “Yom” (Day) an extended composition for seven musicians. As an educator, Rony is a sought-after drumming mentor and was one of the first teachers to join the staff of the Rimon School of Jazz and Contemporary Music. He is a professor of Jazz Studies at the Jerusalem Academy of Music and Dance where he earned a Master of Music degree.

Rony has published several method books including: Rhythm For All I and II, Rhythm For All Dictation Exercises, Fifty Ways to Love Your Drumming, Rony Holan Teaches Drums and Polyrhythms For the Drum Set.